Decent films about adolescence are few and far between, especially when they also attempt to tackle larger issues such as homosexuality and mental health, but TPOBAW manages to sidestep the cliche minefield and comes out relatively unscathed. It’s not perfect but it’s the performances of its 3 leads that elevate it above the usual fair. Logan Lerman makes Percy Jackson seem a distant memory and Emma Watson proves what we knew all along with an  assured turn and a believable US accent but it is Ezra Miller, following his terrifying performance in ‘We Need To Talk About Kevin’ with an about-face as a charismatic young gay guy, who steals the show. 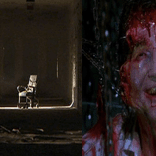 Love and Garbage - some commonplace musings

Writings of a Cinephile